It's not often a BBC news story makes me genuinely laugh out loud ... but here's one;

My favourite quote from the whole article is

"UK military spokesman Major Mike Shearer said: "We can categorically state that we have not released man-eating badgers into the area."

You really couldn't make it up.
Top 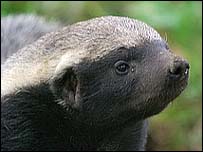 That was my favourite quote.

That's not even a badger! It's an Otter!!!
I can't show you one because the image tags are not working

They work for me.

Man eating badger might be true; depends how hungry he was.
Top

I remember answering a question on Ask A Biologistabout this back in 2007, where I linked to that same article (which I am sure triggered the question in the first place).

I wouldn't fancy messing with a honey badger, but man-eating is going way too far!
Ask a biologist
My blog
Top

I did not have the hyphen in man eating!

jaywhat wrote:I did not have the hyphen in man eating!

I'm sure it's happened (probably Hugh Fearnly Whittingstall), although I wouldn't fancy it myself...
Ask a biologist
My blog
Top

I thought this thread would be about starving troops reduced to eating badgers.

I'm disappointed (but pleased for the badgers)!
"It's hard to put a leash on a dog once you've put a crown on his head"-Tyrion Lannister.
Top
Post Reply
12 posts • Page 1 of 1