Dogs are cruel, Cats are cool

Oo-er! I'll have to check the freezers next time I'm in Tesco's!
Top

Don't know if this is appropriate to post here, but I watched an article on News 24 at the weekend about the huge rise in numbers of staffy-type strays being taken into dog rescue centres and the massive rise in euthenasia doe these dogs. They seem to be (mostly) inappropriate to rehome due to their severe aggression to other dogs as they have often been used for dog fighting. I found a lille bit about it here.

Many of the dogs appeared perfectly friendly towards humans, but were still being euthenaised (there's a euphenism for you!) as they were unwanted by the general re-homing public.

My memory of Staffies years ago was that they were very family friendly dogs, very loyal, quite lazy and a bit clownish. It's very sad.

Here is what the Kennel club has to say about them

ONE OF THE MOST POPULAR OF ALL THE terriers, the Staffordshire is renowned for his courage, which unfortunately can lead him into bad ways with other dogs owing to his great tendency to ‘get his retaliation in first’. With the human race he is kindness itself. He is descended from a cross between the Bulldog and a terrier, and thus combines the temperaments of the two breeds. Fortunately, his genuine love of children is well known.

Although the kennel club is not my favorite organisation (and I an not convinced they give a toss about dog's tempraments. Or welfare) I have recently-through a friend-attended a few "shows" and what seemed apparent to me was that a dog of aggressive temprament could not be shown. They must mix closely with other dogs and be handled by a succession of strangers. I have also become aware that some dog owners show their dogs during their first couple of years merely as a way of socialising them.
I still think it's a glorified beauty competion, though.
"It's hard to put a leash on a dog once you've put a crown on his head"-Tyrion Lannister.
Top

I deliver a posh mag and leaflets etc.
In Spofforth, Harrogate, recently, I said to a lady, "Where's your Staffy today? I've got his biscuit for him."
She replied, "He's buried under that tree over there."
Gulp. Tactical retreat.
a "New Atheist" for the last 55 years
Top

As some of you may have deduced I work for an animal rescue charity and Staffies are certainly presenting us with a challange at the moment. The animal centre that I work in is currently at full stretch dog and cat wise. Far and away the most common breed that comes to us is the Staffie. This is not, as the aforementioned programme alluded to, because of behavior problems but because of owner problems. The Staffie is the chosen "status symbol" of a certain type of person within our society. The type of person who, more often than not, is least well suited to caring for an animal. As a result the Staffie becomes the victim of that person's failure and becomes an unwanted pet. (Add to this the penchant that some of these owners have for "toughening up" their dogs and the problem is then compounded)

That said it is true to say that by and large the Staffies that I have come into contact with have been sweet natured towards both humans and other dogs. The stereotypical "aggresive Staffie" is actually quite rare - although it does of course exist. The mantra "no bad dogs only bad owners" springs to mind here. Furthermore let us not lose site of the fact that some years ago the magnificent German Shepherd Dog was the feared breed, then it was the Rottie now it is the poor little Staffie. Doubtless a few years down the line it will be the Border Collie or the Jack Russell or whichever poor breed the press choose to pick on next. In the trade we refer to this as animal racism and that sums it up rather well.

If anyone is looking to adopt then do please at least consider taking in a Staffie. They may not be the pretty ones but boy oh boy do they need a whole lot of homes right now.
Top

A friend recently re-homed a staffie from the SPCA home in Glasgow. A more affectionate, biddable dog I have yet to meet. She is charm, personified.
"It's hard to put a leash on a dog once you've put a crown on his head"-Tyrion Lannister.
Top

I'm sure we've had that one before!
Alan Henness

Toby harassing the usherette for treats. 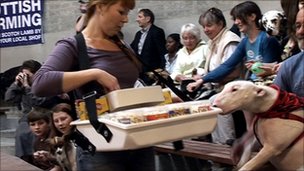 Edit.
This was the short film if anybody wants to see it.
Useless dog.
Abstinence Makes the Church Grow Fondlers.
Top

To help or donate PM me

How could anyone not love them

I am thinking of getting another dog sometime in the future and am currently looking at different breeds (I'm getting a puppy and will not be re homing. A few bad experiences have told me that much).

I have been looking at brittany dogs (via looking at spaniels) and wondered if anyone had any knowledge or experience of this breed.
"It's hard to put a leash on a dog once you've put a crown on his head"-Tyrion Lannister.
Top

I have no personal experience of this breed but this from one of the many websites.

The Brittany is primarily a hunting dog with character, stamina, speed, and great courage.
The Brittany is a force to be reckoned with, having the urge to hunt fixed into it's temperament.

Would it be OK in a rural/farming community?

The Brittany loves to be loved - but it also loves to work.My bold, assuming it wouldn't be a working dog, it would need some other kind of activity to keep it sane and stop it wrecking the house.

They need an occupation or will readily turn into a hooligan.

Like what I've got, not quite a hooligan but certainly an unruly teenager.


The H.P.R. in general needs work, whether it be actual Gun Work, Bird dog Work, Obedience, Agility, or as a well trained family pet taken out for long, free-running, jaunts with the children.

It doesn't sound like a lap dog but if you have the time (and patience) for the agility work and such; Why not?
Abstinence Makes the Church Grow Fondlers.
Top

Yes, Alan. I've always done agility with my dogs (all collies) and would like to also have a go at field trials (my old collie-Shep- was brilliant at retrieving and we took some lessons in working gundog stuff. I'm lucky enough to know a woman who runs these things periodically throughout the year. I don't know much about how the tests/trials are organised yet, but I know that they don't involve live--or even dead!-game. No animals are hurt....).
I have also done Therapet work with my younger collie. He's a complete headcase and when people who know him find out that he visits a residential home for people with dementia they are amazed, but he seems to know that he's "going to work" and is on his very best behaviour. He laps up all the affection and attention he gets. If the new dog is of a suitable temprament, I would consider Therapet work for him too.

Thanks for the info. Can you direct me to that website as I hadn't read that before?
"It's hard to put a leash on a dog once you've put a crown on his head"-Tyrion Lannister.
Top

getreal
Thanks for the info. Can you direct me to that website as I hadn't read that before?

It's from your own link, (though if you google Brittany dogs, there are other websites) go to the sidebar on the left, click on the breed then on temperament.
Abstinence Makes the Church Grow Fondlers.
Top

I have come across the hybrid breed, the Labradoodle, (Labrador/poodle cross), but I didn't realise that it had a specific purpose. Apparently, it was bred to provide guide dogs for people allergic to dog hair, as poodles don't shed their fur. Fancy that!
Top

I think it was a bit of a fail, Nick, as the outcome is unpredictable. Sometimes the resulting pups are small, sometimes large, sometimes they don't shed their coats, sometimes they do. They are also all shapes, sizes and colours. I thought that the guide dogs for the blind had abandoned this (but I could be wrong).
"It's hard to put a leash on a dog once you've put a crown on his head"-Tyrion Lannister.
Top

You could equally be right

Your reply reminds me of the story of the chap who went to the pub with his Jack Russell, only to find a notice on the door which read "No Dogs". Undaunted, he put on a pair of dark glasses and went in.

"Excuse me, sir, but we don't allow dogs in here"

"Come off it, sir! Guide dogs are Labradors and Retrievers!"

I saw a very strange sight today. Walking along the (extremely busy) road was a woman, holding in her hand an empty guide dog harness while a giude dog trotted behind her. WTF was that all about??
"It's hard to put a leash on a dog once you've put a crown on his head"-Tyrion Lannister.
Top

How to turn HELL (aka Ikea) into heaven: